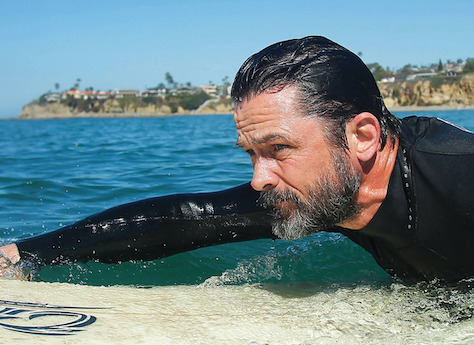 The CTV series Cardinal has brought American actor Billy Campbell back to Canada, his second home – though he’s now mostly in Norway and Denmark. No matter. He stays healthy by trail running, ocean sailing and surfing.

Billy Campbell, now 60, marches to the beat of his own drummer. In mid-career he took time off from a high-powered acting career to join the Picton Castle, a square- rigger that sailed from Nova Scotia to deliver charitable donations of school supplies and clothing throughout the South Pacific.

Campbell is a tough guy. Also kind and funny. His stories tend to be self- deprecating. An athlete who plays action heroes, he loves reading, especially sci-fi and historical novels. He is obsessed with novels about the British Navy during the Napoleonic Wars (this sparked the Picton Castle adventure) and he loves board games (especially on Napoleonic era naval warfare) and (wooden) sailing vessels. 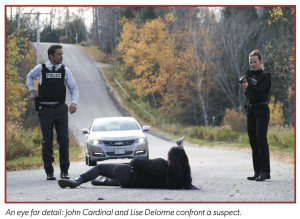 His parents got divorced when he was young. He grew up in Virginia with his mother, where he obsessed about the Civil War, took part in re-enactments, and attended a military academy. Tall and athletic, Campbell played rugby in Virginia, in high school in Chicago when he lived with his father, and in Santa Monica. He still plays occasionally.

It was never his goal to be an actor. “I was forced to try out for a part by my high school drama teacher,” he says. “I got the lead and had a lot of fun. I realized I can do it.” After a short stint at art school in Chicago, he set out for LA where he soon found acting roles.

Until recently, Campbell has been based in Los Angeles and Vancouver, which he once called “the city of my dreams,” although he recently sold his places in both cities. And he has taken roles in exotic places like Sri Lanka just to see the world.

Canada is in his blood. Growing up, he summered in the Muskoka Lakes region of Ontario, where his father had a place. (His father had gone to agricultural college in Ontario.) He keeps a 48-foot schooner in Lunenburg, NS. He calls this his “mobile home” and still enjoys the occasional beer at the Lower Deck in Halifax. He especially loves Cape Breton, where he drops in on his actor friend Alan Arkin. 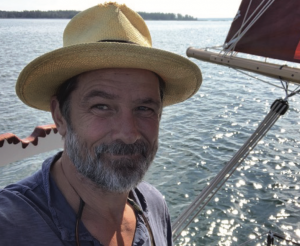 Globetrotting aboard the Picton Castle, Campbell met Anne, the young Norwegian woman who would eventually become his wife. These days he is often at her family farm in southern Norway, or living with her in Denmark where she works in architecture.

Since 2017, Campbell has starred in the Canadian television drama series Cardinal, for which he won multiple Canadian Screen Award for Best Actor in a Limited Series or Television Film.

The final season airs this spring on CTV. It is a murder mystery about homicide detectives John Cardinal and Lise Delorme.

Cardinal is an urban detective who takes a job in small town Ontario because he thinks the pace will suit his wife, who is bi-polar. Turns out his life gets more complicated, not less. Cardinal himself is a complex character. It has drawn a global audience.

Among his many roles in film, TV and on the stage, Campbell has played the best: a sci-fi hero, a vampire hunter, and a president (Abraham Lincoln). And the worst: serial killer Ted Bundy. He received a Golden Globe nomination for Best Actor in a Dramatic Series and was named one of the “World’s 50 Most Beautiful People” by People magazine.

He was sent the script for Cardinal, the crime drama adapted from Giles Blunt’s award-winning mystery novel Forty Words for Sorrow.

“I saw myself in the role of Cardinal,” Campbell says. “But I turned it down because I promised my wife I wouldn’t take a part when she was finishing her architectural studies.

I wanted to be around for her and our child. A couple of weeks later they came back to me. I thought that was a sign from the universe and I would alert her to a possibility. She said, ‘That’s a great part. You’ve got to do it.’”

The dark atmosphere of the show and its forays into medical mysteries are a good fit with the global pandemic, where anxiety and suspense are social norms. Its style mines the rich vein of Scandinavian thrillers that are taking the world by storm.

On Cardinal, Campbell gives a lot of credit to his co-star, Québec actor Karine Vanasse, who plays Delorme. “She’s a cinematic genius, a phenomenal actress and a wonderful person,” he says. Besides the suspense and the action, Cardinal is a show about relationships. “Karine understands the space between the words— the quiet moments,” he says. “The show doesn’t have that frenetic, yakity-yakity style.”

A US citizen with permanent residency in Canada, Campbell is also waiting for his residency in Denmark and Norway. “It is a tax headache for my accountants,” he says. “But I don’t pay much attention to the business side. I have agents and managers who look after that.” He also doesn’t talk about his charitable donations.

His next project is a role in a Norwegian film about the battle of Narvik in 1940. “It was the first time the Germans were pushed out of anywhere,” he says. “This is a way to start to get work on the other side of the ocean to be with my family.”

A globe-trotting actor in his early sixties with a young family, Campbell doesn’t take his health for granted. Although he has always been active, he has become more disciplined with age.

“You are only as old as you feel,” he says. “The old chestnut is kinda true. Today I feel younger than I did 15 or 20 years ago—and I’m grateful for that.”

He boils his health routine down to a few simple principles. He tries to eat sensibly: include fruits and vegetables, minimize junk food, drink in moderation.

“I used to drink a lot if there was free booze around,” he says. “Then one day I asked myself, why? So I stopped.”

As for exercise, Campbell is mostly an outdoor guy. When he can he still plays rugby, a full-contact sport. He has been trail running for decades: in the Santa Monica Mountains when he lived in LA, and in British Columbia when he lived in Vancouver. “In Norway I love to run in the woods and go to a little gym near the farm to hoist some weights,” he says.

The ocean is his second home. He surfs and he’s all about traditional sailing vessels that don’t get from Point A to Point B at the shove of a throttle. “I don’t tool around in plastic motorboats.”

His concern about health goes farther than just himself and his immediate circle. “Most people have a desire to be healthy and to be free from stress and worry,” he says. “We have more in common with most people than we are led to believe. The forces that are arranged against that notion are also profiting from this mindset.”

His adventurous life has taught him some key lessons: “When you travel a bit outside your bubble, you realize that all people want to work, enjoy life, and be free of fear. Given the opportunity, they want to share that with other people.”

Campbell is a man of the world. He just wants it to be a better place.

Author: David Holt is editor-in-chief of HUM@Nmedia, parent brand for Silver magazine and Optimyz Magazine. He’s an avid kayaker and all around outdoorsman with over 20 years experience in the publishing world.