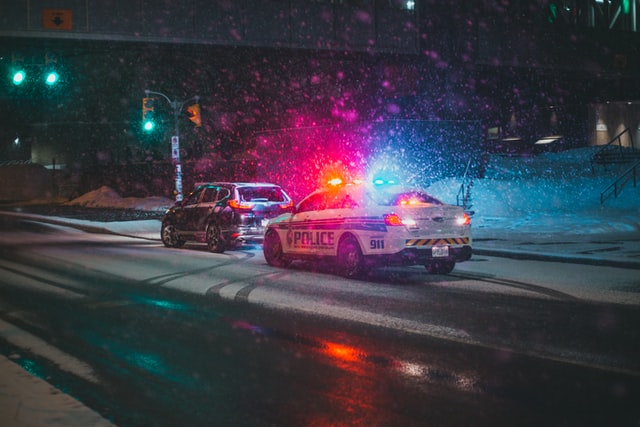 One of the most challenging aspects of being an RCMP officer is children. Having to bear witness to the trauma, abuse, violence, neglect, and harm that happens upon children is the stuff of nightmares. I don’t know if it is ever possible to completely exorcise those images from my mind or heart. They sometimes kept me up at night; they sometimes distance me from others, and they sometimes have me clinging to others, particularly my children. So, when a situation came my way that tipped the scale in a completely different direction, and I saved a child, really and truly saved a child, the hardships of my job at that moment were absolved.

I woke up early on February 6th, 2002, to a cold and bright sunny morning. I had a quick shower and got dressed before I sat down to read my newspaper and sip a hot cup of coffee. I had about thirty minutes before I needed to head to work. I started reading an article about a young girl who had been kidnapped from France. She had been missing for three years.

I am a dedicated media buff. Daily, I read the provincial Chronicle-Herald out of Halifax and the local Truro Daily News., The night before, this particular morning, I had watched the National and the local Maritime news. I was aware of the story of the little girl named Sara and her father, who had abducted her. Her mother had been looking for her worldwide for the past three years and had recently found out that Sara was in Canada. Specifically in the Toronto area. It was big news and was all over the television and newspapers.

When I arrived at the office, the first thing I did was get another cup of coffee and start reading all the bulletins from the night before and from earlier that morning. The bulletins indicated that the kidnapped child was maybe in a blue vehicle with Ontario plates. There was confirmed information that the father was heading East.

My partner at the time, Jim Hannon, had taken a week’s vacation, so I was alone. I didn’t mind as  I was used to working alone. As I’ve mentioned, it’s pretty standard for RCMP officers to work solo in rural areas, especially during the day shift.

At the time, I was working on special detail. For the past year, I’d been part of a drug interdiction project, apprehending drug traffickers travelling from province to province across Canada. They were known to be carrying large amounts of drug contraband and money.  At the time, we had been operating with three teams.  Each team consisted of two members in a marked police vehicle but without the mounted roof lights. We were also extensively trained on what to look for and how to spot these traffickers. At this point, our Division Mobile Traffic Unit had made over eighty drug seizures from vehicles on the highway in a single year.  Also, we levelled Motor Vehicle Act Monetary Fines in excess of a hundred and thirty thousand dollars.

I thought things had been going great, but unfortunately, two teams had been disbanded after one year, leaving only myself and my partner Cst. Jim Hannon to the job. We might have been the last men standing due to our productivity. We had had quite a bit more apprehensions and seizures than the other two teams.

That morning, while I was sitting at my desk, one of the detachment members, Cst. Steve Spriggs came over to my desk and asked if he could ride along with me. He wanted to see what my work consisted of with the special detail unit.

“I would love to have you ride along, Spriggs,” I said, “but first, I have to finish my reports from the day before.”  Even though I didn’t mind working alone, Steve was a great guy, and I was looking forward to having him along for the company.

By the time I finished all my paperwork, it was close to lunchtime.

“Hey Steve, I’m ready to head out if you’re still interested in riding along?” I hollered across the office.  I pushed out my chair, stood up, arched my back to give it a stretch from all the sitting. I was glad to be done with my paperwork.

We grabbed our gear and headed out. I preferred being in the car catching the bad guys.

“I need to make a quick stop at the power center to fill up with gas first,” I said as we pulled out of the station.

“Sure thing,” Spriggs responded. “I’m just happy to be along for the ride.”

“Hey, you mind if I pop into the A&W and grab a burger while you’re filling up?” Spriggs asked as I pulled in. “I’m starving.”

“Not at all. I’ll join you when I’m finished. I’m hungry myself.” I figured this would be a quick lunch, and then we could get back on the road. After I finished fueling, I went to meet Spriggs. There was quite a long line of people, and I could see Spriggs up at the front. An older gentleman in front of him turned around and told Spriggs that he wanted to pay for his lunch. Spriggs started protesting, but the man insisted.  That never happens, at least I’d never heard of it, and it had never occurred for me. It was really great to see a gentleman appreciative of our service. As cops, we’re used to people keeping their distance. In hindsight, I think it provided a good omen for the day.

Steve and I sat down and ate, and we were back in the cruiser within fifteen minutes. I pulled out onto Highway 102 and decided to head north. The sun was at full tilt. There’s something different about the light from the sun when it’s cold outside. It’s as if it cuts a beam right through the air. There’s no heat to dull its shine.

There was little traffic, and the vehicle in front of us was about a mile away. I turned to Spriggs, “I’m going to speed up to about 140 km/hour to catch this vehicle, and then I’ll explain to you what some of the indices or indicators are that I look for.”

I quickly caught up to the car, and I pointed out to Spriggs that the first thing I noticed was that the vehicle had Ontario plates. I explained that traffickers often travel from province to province to distribute their contraband, but by itself, it wasn’t enough to pull the car over. I pointed out that the rear of the vehicle appeared to have a heavy load. I explained to Spriggs that almost every trafficker wants to distance their contraband as far from themselves as they possibly can. Not always, but usually, that means it’s in the trunk of the vehicle. Then I said, “do you see the child in the back seat?”

She was going from one side of the back seat to the other side.

I said, “She’s not wearing a seat belt.”

That was an infraction to the motor vehicle act, and it gave me the legal authority to stop the vehicle. We were now in a 100 km an hour speed zone, and the driver of the car in front was driving the speed limit, and I’m sure he knew that we were behind him.

The next thing I said to Spriggs was: “There’s one more thing that I’m going to do. I’m going to pull up parallel to his driver’s door, and I want you to turn your head ninety degrees towards him and keep a lookout for his reaction.”

I pulled up parallel. We were both looking at the driver, and the first thing I noticed was that he was slipping down lower and lower in his seat. It was almost like he was trying to hide his face.

“We’ve got something,” I said to Spriggs.

Prior Story: Read about the harrowing second shooting here that Patrick faced.