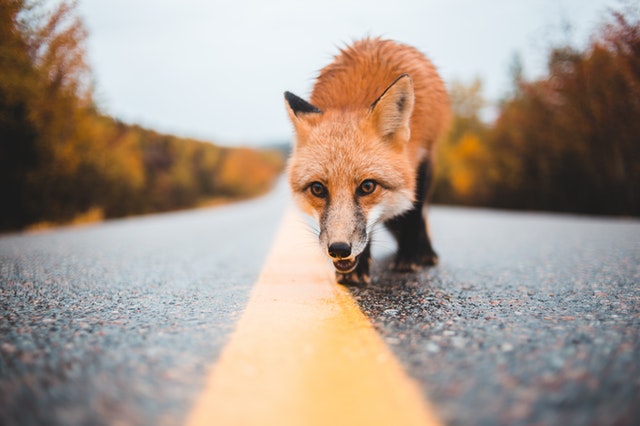 Who is an ally? Who is an enemy? What is good? What is bad? It can be hard to tell. There are many Sufi proverbs to this effect. Let’s explore this from where I sit in tree-lined suburbia, outside Halifax, Nova Scotia, a small city in a small province of Canada.

Canada has a large landmass and many natural resources, but a small population. The economy, measured by GDP, is smaller than that of California. Let’s keep this in perspective.

A few days ago, I left the blinds open as I prepared for a morning Zoom meditation with Yogiji in Rishikesh, India.

It was grey, raining. No direct sunlight. I was facing east, looking out the front window onto the tree-lined yard. Didn’t need the blinds.

I stared at my open laptop, which connected me to the internet – to India, to Yogiji’s computer in Rishikesh at the upper reaches of the Ganges in the foothills of the Himalayas.

I looked up and out the front window.

A large animal appeared in my field of vision, cutting from left to right, loping across the lawn toward the trees. A red fox – the largest one I had ever seen. His intelligent eyes seemed to take everything in. He glanced in my direction, but not at me.

He was alert, yet relaxed. Moving quickly but not rushed. He was gone.

Then came the mantra, “Om Namah Shivaya,” one of the most common and most essential, a meditation upon truth and bliss.

Good start to the day.

A few hours later I read about the Great White shark that had been tagged on the South Shore of Nova Scotia in October 2020. This female was 17 feet long and weighed more 3,500 lbs. They estimated she was at least 50 years old. The team from the OCEARCH project called her “Nukumi,” from the indigenous Mi’kmaq word for grandmother.

Great whites prowl the seas. They come off our coast in search of seals. There is one that has been coming to the shores near Parrsboro, Nova Scotia in the Bay of Fundy, where I kayak in the summer.

The day after the fox sighting, I saw a couple of bald eagles. To me, they seem to come from another world. The same as foxes and sharks. Although eagles are mostly carrion eaters, they are also predators. Farmers don’t like them, as they may take the occasional lamb. Foxes may get in the henhouse too.

Humans are predators. We are at the top of the food chain. We don’t like competition. We have been killing other predators forever. Some threaten us directly, but mostly we just don’t like any competition. We are the Lords of Nature, and we like it that way.

Wolves especially have paid a high price for their interactions with humans. Cougars, which tend to be solitary, less so.

When we don’t like something we try to get rid of it. We use the word “war.” The war on cancer, the war on drugs, the war on poverty, the war on terror.

As others have pointed out, this is the wrong metaphor. These are not enemies we can subdue. They are the unintended consequences of our modern civilization. They must be addressed indirectly.

Predators are part of nature. They are at the top of the food chain. Remove predators and prey species may go out of control and destroy vegetation, knocking the whole ecosystem out of whack.

In fact, there is one predator species that seems intent on destroying the biosphere one species and one ecosystem at a time. To quote Pogo, the genius cartoon: “We have met the enemy and it is us.”

The big threat to us nowadays is a virus – COVID-19. At least that is the one that holds our attention for now. To listen to the media and governments, we are making war on the virus. It is either us or it.

That is a little too simple.

As humans destroy the habitats of earth, species that would remain isolated interact. Pathogens evolve and are passed from species to species and from place to place. They can even travel by air.

Viruses and bacteria are not the enemy. Neither are foxes, sharks, eagles and wolves.

In the last few hundred years, humans have gone from being at the mercy of nature to subduing her to our will. We are polluting the planet, destroying biodiversity, destabilizing the climate. We are like children destroying our own sandbox.

Foxes and sharks, eagles and wolves, they are all part of a balanced world. So are microbes. They can kill us, but they are also canaries in the coal mine, warning us of our destructive habits.

Humans are an advanced species, sort of. But we still have a long way to go. We are still part of nature, with many lessons to learn.

What’s good? What’s bad? It can be hard to tell.