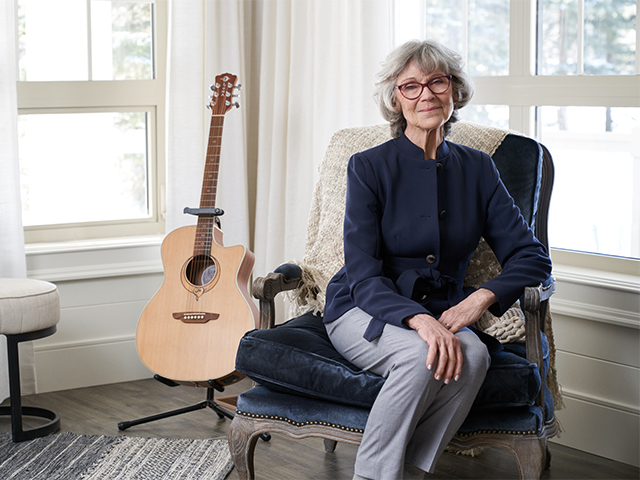 Deborah Grover, who plays “TV Jann’s” mother Nora in the show, has learned to pace herself in a challenging acting career. All this while playing her own family roles as wife and mother.

Grover can relate to the character of Nora, who is based on Jann Arden’s real mother, the late Joan Richards. Like Richards, Grover also made career sacrifices to look after her children when they were growing up.

In season 3 of JANN, Nora experiences early-stage dementia. “Playing her is an unbelievable experience,” says Grover. “This is a wonderful challenge from an actress’s point of view. Nora’s experience has an impact on the entire family. Everybody is learning. There is fear of the unknown, but it is not all dark. There is crazy laughter. It is a tricky dance. We try to find the truth and the humor.”

Grover is also inspired by working with Jann Arden. “She sets the tone and also brings her joy and wacky sense of humor to the project,” says Grover. “She has gathered us to create the story loosely based on her experience. It is gratifying to be part of it. Retelling her mother’s story with humour and love gets people thinking. It is starting a conversation.”

Grover also says that “Jann is not afraid to fail. She is pushing our creative boundaries.”

Jann has not had an easy life, she says. “She had to deal with a troubled brother and looked after both her parents in their declining years. When Jann was young she would escape to the basement to find solace in music. Later she went through her alcohol phase. Then she found a new healthy lifestyle. She lives her life consciously. As an actor she’s so present and available.”

Grover has a sense of gratitude for what life has given her. “The arts opened doors for me,” she says. She studied acting and dance as a girl, took classes at the National Arts Center in Ottawa, went to the Ryerson theatre school and did two summers at the Banff Centre.

But it hasn’t been easy. “When I was younger, I put a lot of my energy into raising two lovely girls,” she says. “Then I would rush out the door for
an audition.”

As an older actor, she finds it liberating to work with minimal makeup. “I look at the young women with all their makeup,” she says. “They see this on Instagram. Everything tells them what they should be like. Now I’m an older girl and I can just be who I am. I embrace that.”

She is concerned so many young people seem to have embraced a sedentary lifestyle. “They say sitting is the new smoking,” she says. “I see children just sitting in front of screens all day.”

She maintains a plant-based diet. “I haven’t eaten red meat in 40 years,” she says. “I still have some fish occasionally and enjoy a glass of wine in moderation.”

This lifestyle helps in a career where she needs to sustain her energy through long days of shooting. The workday can be 12 to 14 hours, depending on how many scenes she has. Like other actors, she has created her own quick form of meditation to help her recharge between scenes.

“The sets are very active places,” she says. “You have to pace yourself to get through the day. As an actor, you need to create your own bubble. Sometimes I take a quiet moment to go in the corner and shut my eyes and breathe.”