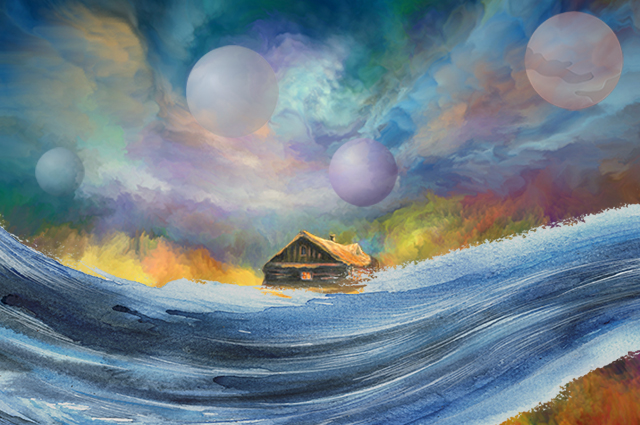 My mother was an actress.

She wore capes – long ones that billowed behind her as if they were motorized – and when she was still, they landed on the floor in beautiful puddles. Her jewellery – big and colourful like planets – exuded a shimmer of sitar-like music which narrowed into a single coke-bottle note in the evenings. Andy Warhol designed a pair of earrings for her. They looked like two ruins that had been pulled from the earth, but when she wore them – I don’t know what to tell you – something out of this world happened and I’ll just leave it at that.

When she hugged me, her perfume stayed with me all day, bloomed when I shook my head, and when she was away, I’d dab it hot behind my ears the way she did behind hers. I waited for it to wear off a little before I ebbed my way through the house but the china rattled in its cabinet anyway, the clothes in her closet trembled, doors quivered when I passed.

She wore a dot like Elizabeth Taylor above her lip.

My father was a fisherman. He was a carpenter, too, but in this story he was first a fisherman with a fly rod in his large dusty hands, a row of beautifully tied flies swaying like birds off the lip of his shirt pocket, his eye on a distant shoreline. He was a sturdy and handsome blue-eyed Irishman, but when he was fishing in the tumultuous river, he wore his body like Baryshnikov.

There was a small airport just outside of town and I’d feel it in my chest when my mother zoomed by. We always knew she was coming, she called us every night except for weekends when we were at the river, and even if it was a school day, I’d make my way home where the atmospheric conditions altered before my eyes in in preparation for her arrival.

But one day she came home unannounced and when I walked into the house there she was, lying on the couch with her head in my father’s lap, wrapped in a blanket, the first time I’d seen her without her dot.

She had appointments all the time and we eventually moved to Toronto for six months so she could undergo treatment. She lost her hair and her capes became only fabric which she had to wrap around twice.

Every morning, no matter what, I painted her dot, balanced it above her lip, cold as ice, and then I’d kiss her for the duplicate.

You probably are waiting for her to die because that’s the way stories seem to go, don’t they? As if their writers aim to break your heart for no good reason.

I am not that writer, tra-la.

It took a year but my mother’s hair grew back and she was given a clean bill of health – just like it never happened,  she said, as if it was all make believe– and she started to wear her planets again, her clothes became beautiful, light came back into my father’s eyes.

My parents were in love love, yet the majority of their lives were separate, without intersection.

My father never went to Hollywood like other husbands, and had not been to any award ceremonies. Instead, we sat on the couch and hooted into the small television when she thanked us in front of the whole world for our love and devotion, as if she didn’t know what a cinch it was.

And she never went to the river, had not stepped foot inside the cabin, had never experienced the joy of opening that door onto the river where it rushed and spilled and was altogether a beautiful, wild calamity.

But after she got better she came.

It’s so beautiful, she said, I feel as if I am in a poem.

My father looked at her as if this were true.

She never went back to Hollywood and the award she won for her final role was shipped to the cabin on the river. She adorned it nightly with her solar system jewellery.

At the beginning, people came right up to the door with cameras like black bugs. She was kind to them, but shut the door. A few more came after the rush, and one or two much later. She granted one of them, a blue-eyed boy in his early twenties (my age at the time), an interview. He asked her all kinds of questions – glancing at me – not knowing at the time that he would grow old in this story.

My mother still feels as if she is in a poem, but to me, it feels more like prose.

Discover More: You might also enjoy this article on how long can we live?