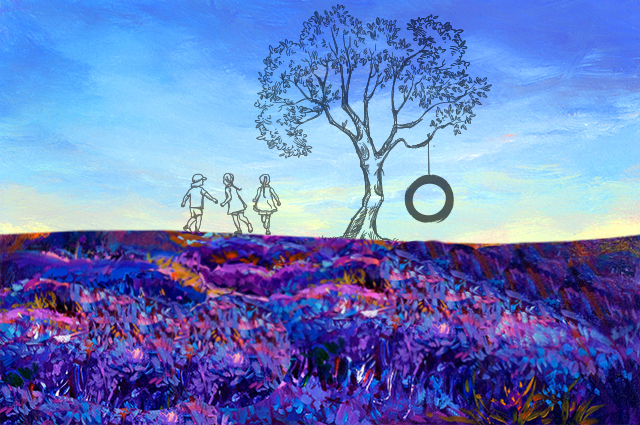 These are a series of fictional stories by Canadian writer, Sherry Cassells featured exclusively on Silver.

I took an online writing course which I tried to cancel but it was too late. Our first assignment was to tell one truth and one lie and our fellow writers had to determine which was which. I said  I am purple and  I am looking forward to this course… They all got it wrong.

Give your characters something to want, create conflict, show don’t tell, write what you know.

Say hello to Marvins, my protagonist who wants for nothing. He is not based on my father or my teacher or a dead uncle or anyone else. His name is because his mother named him thrice, once for him, and once for each identical brother who didn’t make it.

Another important thing when writing fiction is plausibility.

Marvins is an old man. His veins are squished blue between skin and bone and he moves like a puppet, from straight to bent with nothing in between. He goes down the stairs in little hops like a stick-man, doesn’t give a hoot about the weather or if he’s out of oatmeal or his pants being too big. He will spend the day on the porch no matter what, his pale eyes adoring the fields, their tinted shapes, the ribbed earth, the tire swing like a target, a carousel of memories.

He might think about the farm when it was bustling, when it was just the two of them, the way the chickens would line up politely waiting to be fed, Helen coaxing the neat green rows into record-breaking yields year after year, the cows scattered in the green like puzzle pieces. And when the children came, the huge pig tearful young Jay bought with his own money to save it from slaughter, the scarecrows Bea and Kay dressed in whatever old clothes they could get their hands on, the fields and fields of lavender that Helen said made her dreams purple and after she said it, his went purple too.

Marvins bought the children like livestock from the family by the creek the other side of town. The man had walked all the way, fifteen miles at least, and he came up to where Marvins was working on the tractor.

I have three babies for sale.

Marvins tried to hide the electricity. He looked at Helen who was watching through the kitchen window, a pale plate in her soapy hands like the moon. Marvins pointed to the truck and the man and the road, indicating that he was going to help this story along, and she quite absently nodded.

He remembers now, the silent exchange, the three-headed sack upon which the man had scrawled the names Bea, Jay, and Kay in charcoal, and afterwards, the way the three babies lay one two three beside him in the truck, their mouths open like little birds.

Marvins floated the car along the road and when he placed his hand lightly on the sack it felt as if it contained branches, as if they were stick-babies. In a separate sack, for an extra twenty five cents, rags of diapers, three small bottles, a single spoon.

Marvins clicked his tongue and six blue eyes swooned his way. Each child had a birthmark in the centre of their forehead, as if they’d been torn apart like segments of a grapefruit, and plausibility aside, the ugly red shapes that would fade in time displayed the letters after which each of his children were named: B J and K.

The B and K were similar butterflies, the J a fishhook.

Helen was waiting when Marvins drove up.

Later she would tell Marvins that while he was gone she had sat on the front steps wondering if she might be dying young. Her heart beat wildly and she had the sensation it was not far from bursting. She told Marvins that as time went on she felt somehow more than herself – she felt amplified and vivacious – as if she were Helens. She pictured Marvins finding her in the chair on the porch with a purple-edged hole in her chest from where her hearts had finally leapt.

But she saw the car glide up the driveway in the sunlight and she dove from the porch, flew to the car not knowing what was in there, unaware that hers is the character in this story who wanted.