Home Longevity Mr Speaker! Behind the scenes with the Speaker of the House

It’s not that you haven’t heard of the Speaker of the House. It’s just that you don’t know much about that role in government. Most speakers like to keep it that way. They are happy to stay out of the limelight.

For many Canadians, the only time we see the Speaker is on news clips or, if you’re a political news junkie, on C-Span when the House is in session.

The Hon. Geoff Regan has served 24 years as a Member of Parliament, Minister of Fisheries and Oceans and four years as Speaker of the House in the first Trudeau government.

I wanted to take Canadians behind the scenes of the Speaker of the House to understand the history and importance of the role. While we’re talking, Geoff has CNN on mute and I am streaming Jeff Bezos launch into space.

Geoff served as Speaker from December of 2015 to December of 2019. He lived, as all Speakers do, in a small house that is known as The Farm, which is located in Gatineau Park across the river from Ottawa. The Farm was originally built in the mid-19th century by French settler Henry Fleury and was just one room, as many houses were then.

Canada’s tenth Prime Minister, William Lyon McKenzie King, bought the house and property in 1927 and carried out substantial renovations. In 1950, he bequeathed the house to the government and it was originally thought that Prime Ministers would live there. (As we know, they live at 24 Sussex Drive and the leader of the opposition lives in Stornoway.) There is also a two-room apartment available to the Speaker at the Centre Block.

“It’s very comfortable and being located in the park, there’s opportunity for hiking, running and walks in the summer and cross-country skiing and snowshoeing in the winter,” Geoff told me.

The park is closed to vehicle traffic from October to May and the roads are groomed for cross-country skiing in winter, making it one of the best places to cross-country in North America.

“Most days I was up at 5:40 and I would be picked up around 6:30 to be driven to the Centre Block,” he said. “When the weather was good, I’d go for a quick run before getting dressed and ready for the first meetings around 8:30AM.”

“Getting dressed” meant not a normal business suit. The Speaker, his deputies, and some others, like clerks, wear a specific uniform. For the Speaker it is a tuxedo-like shirt with tie, and a jacket, without lapels, made of silk.

“It’s a tradition out of the UK, where when a politician becomes Speaker of the House, they call it ‘taking the silk,’ meaning the barrister or MP switched from wearing wool to wearing silk, black at that. At least one didn’t have to think about what to wear everyday!” 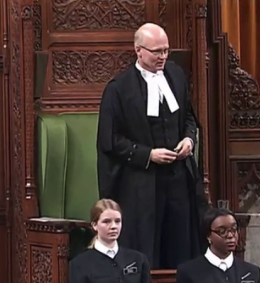 The Speaker has a staff of around 2,000 people, and had a budget of $414 Million in 2015. While this may seem like a lot, it isn’t really. Consider that the Speaker is like a CEO in a company but there’s also 338 Members of Parliament, their staff and all the functions of the House of Commons.

The staff include IT personnel, transcribers who write the Hansard (remember, that must be bilingual as well), translators, HR personnel, clerks, security, maintenance ,and others. There’s a lot of moving parts.

This also includes various MP offices around the country. In some of the northern ridings, an MP may require two or three offices. In some communities, the only access is by air, so planes have to be chartered as well. And sometimes boats.

The Speaker is also the de facto Chair of the Board of Internal Economy. This is where major decisions are made regarding the annual budget, policy and procedure issues, member rules and how the House will operate.

Another part of the Speaker’s job is diplomatic. A new High Commissioner or Ambassador to Canada will, after presenting his or her credentials to the Prime Minister and Governor General, also visit with the Speaker.

The Speaker often travels to other countries as well, meeting with their counterparts. In the Westminster System such as Canada and the United Kingdom, it means other Speakers. During his tenure, Geoff went to London, Paris, Prague, Mongolia. Says Geoff, “One of my areas of focus was to see how other systems deal with the issue of younger women and childcare. It was and is very important.”

This international activity helps foster deeper international relationships with other countries, which can help maintain stability in times of crisis.

Then there’s the actual Speaker of the House duties when Parliament is in session. The Speaker has to be as non-partisan as possible. But can also be the tie breaker for the party he is with if needed. This is helpful in minority governments.

Wonder why an MP and even the Prime Minister has to say, “Mr. Speaker, through you to the honourable member”?

Says Geoff, “It’s a way of cooling down the rhetoric when things get heated,” as it causes a mental break. Clever. MP’s have 35 seconds to answer a question and the responding MP also has 35 seconds. The Speaker must keep track of that and ensure they stay on time. A lot of judgement calls have to be made when the House is in session. The Speaker will also have to make calls on the rules of order during, before and after a session.

“I worked very hard to remember that being impartial was critical to the role and it was always my focus” said Geoff.

While the Speaker can’t fine or really censure an MP, they can have them removed from the House for the rest of that session. The MP returns for the next sitting. Sometimes, a party will make a lot of noise, banging their hands on desks and shouting.

“This is often not because they’re upset at that particular issue, but because they want you to favour them on the next issue,” Geoff told me.

The Speaker’s role varies by country as well. In Canada, the Speaker is elected from one of the political parties at the start of every newly formed government. In Isle of Guernsey, the Speaker is the Magistrate and is appointed. In the United States, the Speaker is the most senior member of the party in power, such as Nancy Policy currently, and formerly Mitch McConnell.

Another difference between the American and Canadian system is that our Prime Minister sits in the House of Commons as the Prime Minister is also a Member of Parliament and has responsibility for their constituents as well.

When a new government is formed every MP is automatically on the ballot for Speaker. They must state in writing if they wish to stand or not. “This is why you see MPs standing and asking to be removed from the ballot, it’s because they forgot to send the letter in time.” Says Geoff.

The tone was set for how Speakers would act and govern by William Lenthal, who served nearly 20 years in the 1600’s in the British parliament and in January 1642 was the first Speaker to defy the king.

In January of that year King Charles I showed up with 400 soldiers at Parliament looking for five MP’s he thought as treasonous. When he entered the House, Lenthal famously said, “I have neither eyes to see nor tongue to speak in this place but as this House is pleased to direct me.” He was the first Speaker to defy the Crown and the tone was set.

A Canadian Parliamentary tradition when a new Speaker is elected is to drag them to their chair. The Prime Minister and the Leader of the Opposition do this, and they have some fun. 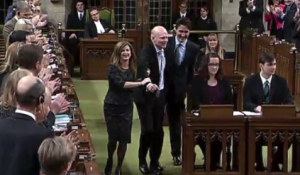 I asked Geoff why. “It comes from the early days of the UK when the role of the Speaker was to deliver a decision regarding a request, such as for money, that the Monarch made. And it wasn’t always a favourable decision for the Monarch.” So no one really wanted that role. Wonder why? As Canada is a Constitutional Monarchy, we carry the same tradition.

When the next election is called, Geoff will be retiring, as many Speakers do after their tenure as Speaker. According to Geoff, “it’s fairly routine, since it’s hard, after serving in such a role, to go back to being in a more political role.”

Which makes a lot of sense. The Speakers job is challenging and highly stressful and having to be non-partisan changes the dynamic of the relationship between political parties over the years. Most Speakers have been there much later in their political careers as well, so they’re thinking retirement around that time.

To deal with the stress of the job and being an MP, Geoff is an avid runner. Often in summer, he’d ride his bicycle the 19 km from The Farm to his office. He continues to run, ride and cycle and is an avid cross-country skier in winter.

Years ago Geoff told me, “I wasn’t sleeping well and went to see my doctor. He told me to exercise more and eat well, then come back and see me in three months. I never went back and I’ve never stopped exercising.”

Today he lives in the community of Bedford, Nova Scotia, a suburb of Halifax in the Halifax West riding. We didn’t have time to get into what’s next for him, but he’s served Canada with distinction and in Geoff’s voice is the manner and tone of someone who’s been there, done that. He’s a leader. No doubt he has adventures ahead.

As we wrap up, Jeff Bezos’s rocket has returned to earth. Geoff says the highlight for him was the 80-year-old female passenger, Wally Funk, who’d been a pilot who trained as an astronaut but wasn’t allowed to fly since it was considered “for men only” at the time. That’s a really cool thing for Bezos to do.

You may also enjoy this article on keeping your cool in the age of unreason.

Author: Giles Crouch is Group Publisher for HUM@Nmedia, the parent brand for Silver Magazine. He is also a digital anthropologist and occasionally writes for Silver.