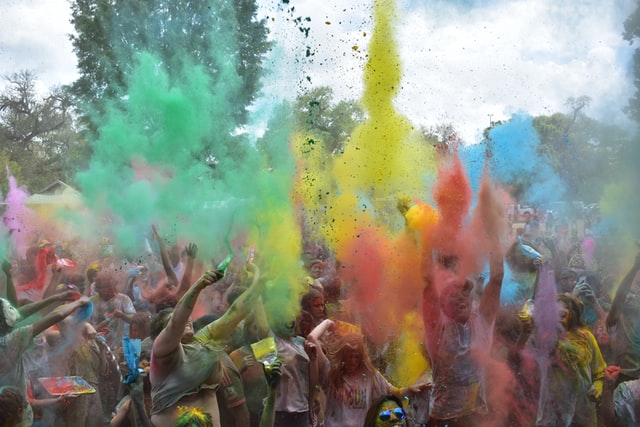 Around the world cultures and religions celebrate spring in many colourful and different ways. They are wonderful experiences that show us how much we are all the same.

Rites, celebrations and passages of spring have been a part of the human existence since we began to evolve a culture. Our early ancestors would hold celebrations as seasons changed to ask their gods and ancestors for mild winters or early spring growing seasons. Spring celebrations and harvest festivals were tops throughout the cycle of the year all around the world.

For many cultures, spring celebrations weren’t just for good crop growing ahead, but also represented fertility in their sociocultural groups. In Sweden, they have the Festival of the Penis, or St. John’s Day at the summer solstice. It is from pre-Christian days and was a nod to the pagan god Freyr, who represented fertility and renewal. In Sweden, it’s considered more of a celebration than Christmas! Okay, it’s approaching summer, but hey.

The Celts celebrate Imbolc at the start of February that signals the coming of spring. They would often sacrifice a baby lamb born before Imbolc. Largely because the grass would not be green enough for the baby lamb to survive anyway and it fed the family. Later, the Celts celebrate Beltane, also known as the fire festival when it is time to grow crops. There are wonderful festivals in Ireland, Wales and Scotland. Some with massive bonfires and poetry recitals.

In India, there is the Hindu celebration of Holi (also known as the Festival of Colours) with enormous feasts and ritual cleansing in the holy river Ganges. Perhaps most well known from Holi is the throwing of powdered colours at each other. It is an amazing celebration of life and renewal.

There are a number of different spring celebrations across Islamic cultures as well, usually featuring time for prayer at a mosque and a big family meal. In Iran they celebrate Nowruz, where they gather around a table called “Hast-Seen” and also have coloured eggs like we see in Christian celebrations of Easter. Nowruz is considered the start of the Persian new year. In Egypt, they celebrate Sham el-Nessim, which goes back nearly 3,000 years as a celebration of spring and renewal and includes coloured eggs as well!

Easter is considered the spring celebration in Christianity and goes back to the pagan times of celebrating the ancient goddess Eostre whose symbol was a rabbit or hare. In Christianity it is a celebration of the rising of Jesus and is held close to spring equinox just as Christmas is close on the winter equinox.

As we can see, eggs feature in a number of cultures celebrating spring. Because they are representative of fertility. But it is interesting to note that independent of each other, multiple religions colour their eggs.

In Canada, spring is edging ever closer and because of our cultural diversity, we will see many different celebrations of spring, from religious to a more non-religious celebration of easter with baskets of chocolates and egg painting and hunts for the kids. Regardless of ones’ personal beliefs, it is a time of renewal for all and it means those warm, lazy, hazy days of summer are just around the bend in life’s long, wondrous road.

You might also enjoy this article on Thrive, an organisation started by two Canadians to bring farming to Africa.

Author: Giles Crouch is a digital anthropologist who studies online society and culture through netnographic research and writes on the intersection of humans and technology. He is also Group Publisher and COO for HUM@Nmedia, the parent brand for Silver Magazine.