Home Resonance Where the whales live 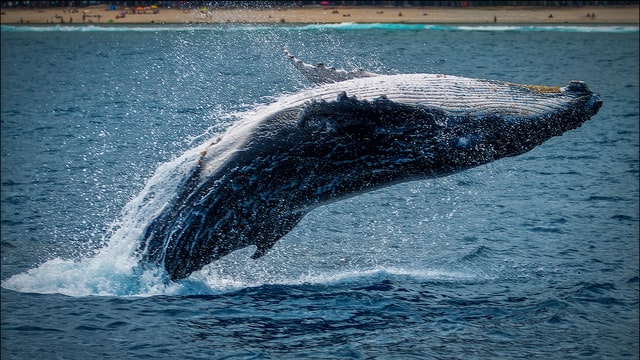 Humpback whales are huge mammals that live in the oceans of the world, coming to the surface only to breathe. Like humans, they are purposeful, playful, intelligent social animals with complex languages. Like us, in pursuit of females the males are aggressive. The whales have to prove themselves. They have many vocalizations but only the males produce the long “songs,” as they are called.

Not long ago, like many species they were hunted around the globe for their oil, which was used in lamps. Humpback populations fell drastically until the 1960s, when a moratorium was put in place.

Until recently it was thought humpbacks lived to 40 or 50 years. Recent research has nearly doubled that. This is something we learned on the Brier Island Whale and Seabird Cruise. “Some of the whales we might see could even remember the whaling years,” our guide said. “Somehow they have forgiven us.”

It was late June, 2021. We were on a family vacation on Brier Island, off the coast of Digby, Nova Scotia, in the Bay of Fundy, home of the world’s largest tides. In this the era of COVID-19, this was the farthest we had been for a while.

Even getting there from Halifax was an adventure. My wife Donna and I in one car with grandson Oscar, nearly four. Our daughter Claire Holt with her husband Nathan King, and Gwen almost one, in the other. We had lunch in Wolfville, from the Naked Crepe, on a shaded picnic table in a park. There was a statue of a lady dancing in wooden shoes. She was Dutch, a member of the Resistance in WW II, who had been captured and somehow lived to tell the tale. Later she lived in Nova Scotia.

We stopped at Fort Anne, at Annapolis Royal, an early European settlement in North America. The site was taken from the first people and fought over by the French and the English. Oscar asked about the cannons. It’s hard to explain why adults do things like that.

Brier Island is remote. To get there you take two ferries, the first to Long Island. We stayed at the Mariner guest house at Westport, near the ferry terminal. It is a small place. Everything is close. The day we went out it was supposed to rain. There had not been many whale sightings. Tourism had been curtailed by the virus.

As we left the harbour the guide said we could go farther out into the bay to try to find whales, so long as everyone agreed. It would be a longer cruise. The wind rose, churning up the sea. Oscar fell asleep. Some of the passengers looked queasy. Gwen played happily, eating and drinking.

Gradually the seas calmed. The sun came out. We approached a buoy that marked a shallow shelf, where upwelling brought food to the surface. “There’s a spout!” called one the crew.

Soon we had three humpbacks off our starboard side, slapping their huge fins and tails against the surface of the water. They disappeared and reappeared, staying with us for an hour or so. People of all ages screamed with joy.

Besides the tour, the company is part of a research project and our tickets help to pay for research into whale behaviour. Researchers know individual whales by the distinctive markings on their tails. Some have come by for decades.

These three whales are regular visitors, said our guide: Luna, Magpie and Gremlin. While hundreds of whales may pass through the bay on their migration, many don’t stay long and most avoid any vessels. Not these three. They seem to enjoy showing off for the tourists.

Another boat appeared, a whale watching vessel from Digby. The three whales disappeared and soon surfaced near the other vessel. They were putting on another exhibition. It seemed a distinctive show of intelligence, purpose, perhaps even humour. As the guide said, the whales can move fast, near the surface or far below. They stayed with the boat only because they wanted to.

We also saw shearwaters, puffins, gulls and a harbour seal. Returning, we saw a pair of eagles in the conifers near the shore. There was a special feeling onboard. Our guides, including two marine biology students, obviously loved their work, as did the captain. They all got a round of applause after we tied up at the wharf.

It was a peaceful scene. Small fishing boats sheltered behind a manmade spit just past the ferry wharf. Cages for farmed salmon and two vessels used in tidal research lay just offshore. Onshore, yards were  lined with metal lobster traps and colourful buoys.

One afternoon Nathan and I drove to Seal Cove near the Coast Guard Station. The wind was strong, the surf breaking. It was easy to imagine this world in winter – beautiful but rough, raw, isolated.

On the drive back we stopped at the trail to Balancing Rock on Long Island. The 1.7 km trail outside Tiverton wends through woods and bog to the southern shore of the island. Then you take wooden steps down to a platform to view a 20-tonne volcanic rock balanced precariously on a ledge above the waves of St. Mary’s Bay.

A display on the platform explains how most of the commercial fisheries devastated the once-rich fishing grounds. Now most of the value comes from the lobster fishery. Looking over the vast ocean, it is hard to image the decades of devastation, the result of 20th century technology and man’s voracious appetite for both food and wealth.

The humpbacks, once on the verge of extinction, are rebounding. Maybe there is hope for the other species. Meanwhile, in Western Canada, wildfires are burning and temperatures soar, reminders of climate change, global warming. Until humans get fossil fuels under control, our other conservation politicies don’t mean much.

Back home, I tell Yogiji, via Zoom, about the whales. “They are intelligent mystical animals,” he says, his eyes alight.

Meanwhile it is very hot in India, he says. “Like a sauna. But that is good. You sweat out toxins. Besides, that is nature. We live in nature. We need to experience it.”

You may also enjoy this other article by David around nature in the winter.