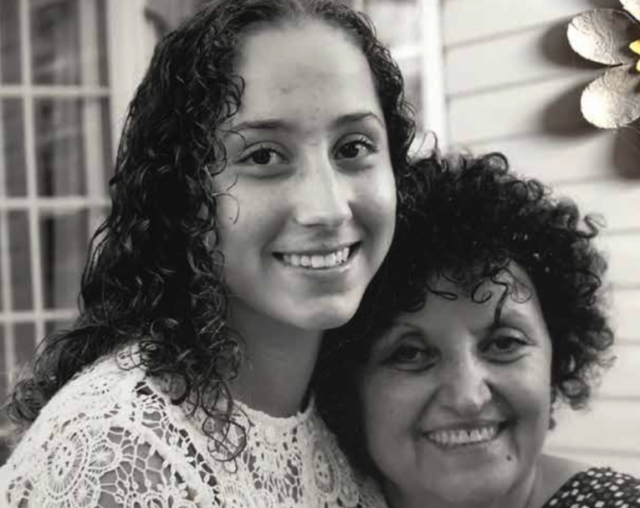 Aggie Missaghian’s faith – in her family, her religion and in herself – carried her from Iran to PEI.

It’s February 1984. A family of five stands waiting at the Charlottetown airport with two trolley loads of suitcases – torn and patched in places and tied together with rope to keep them from falling apart. The family is warmly greeted by several locals and three cars. It’s their first day in Canada.

My grandmother, Aghdas (Aggie) Missaghian, nee Sobhani, was born in Tehran, Iran in 1943. She grew up in Gonbad city within the province of Tehran and was raised as a Baha’i.

The Baha’i Faith is based on unity – the oneness of God, the oneness of religion, and the oneness of humanity. Baha’is believe it their mission to bring harmony and unity to the world through God and His love. The Faith was established in 1863 by Baháʼu’lláh. It originally grew in Persia and parts of the Middle East, where Baha’is have faced ongoing persecution since its founding.  It has now spread throughout the world, with adherents from all backgrounds and walks of life.

“What do you remember most fondly from your childhood?” I ask my grandmother.

“I have good and bad memories about it,” says Aggie, “but my favourite were the times I wrestled with my dad! He always let me win.”

Aggie’s brother was studying in Italy, so she remembers being spoiled as the only child in her home. She was enjoying life.

“I miss that!” she says, remembering happy days from her childhood. She misses her native land a lot, having not returned since her family’s departure in 1978.

“I hope one day I may be able to go back to my place of birth,” Aggie laments, knowing this will be unlikely.

Aggie’s father was a merchant and her mother was a busy housewife and an active member of the Baha’i community. Aggie herself was an active member in the community as well. She was the secretary of the youth committee at the time and often worked with a young man who was the chairman. That man became her husband.

Aggie worked as a primary school teacher in Iran until she moved with her husband and three young children to Mysore, India in 1975.

There were mixed feelings among friends and relatives about the state of my grandparents’ sanity when they made the decision to sell everything and move to India. Some thought them crazy and irresponsible, taking three young children away from modern Iran to what they considered a backward country where even the water was unsafe to drink.

“Not only that, there are diseases in India that the rest of the world hasn’t even heard of. They are going to kill those boys!” some said.

The “boys” were my father, Nadim, and his two younger brothers, Nassim and Navid. They were ten, four, and three years old at the time. They didn’t really know what was happening except that some big controversial travel plans were being made.

Other friends were very supportive: “Get your family out of Iran and let them experience what else is out there. The boys will learn English and will have opportunities that kids here may never have!”

There were many reasons for my grandparents’ decision to move to India. It was their passionate desire to assist with the growth and consolidation of the growing Baha’i community. They also wanted their sons to have a good education and be of service to society. As parents, they felt the importance of raising their children with good values and a strong faith.

In the summer of 1975, the family boarded the Air India flight that would change their lives forever. In preparation, my grandfather had taken English courses and was getting quite good. As the oldest son, Nadim learned a few English sentences as part of the school program. However, Aggie and the toddlers did not speak a word of this foreign language.

“Looking back now, I only feel admiration for their courage and their faith in taking that bold step,” says Nadim, now 56.

The family arrived in Bangalore, where they made a deal with a taxi driver to take them to the Baha’i Centre in Mysore, which was to be their new home. The taxi ride took over three hours, the poorly paved roads riddled with potholes slowing them. They bounced along the uneven “highway,” passing endless fields and farmers using old manual tools. There were goats, cows, chickens, and other barn animals roaming freely along the side of the road and the driver skillfully avoided them.

The taxi took Aggie and her family through the slums and narrow streets leading to their new neighbourhood where the Baha’i Centre was located. Aggie remembers being shocked to see naked kids running around on dirt roads, snot running down their faces. There were many cows and goats too, and rickshaws and motorcycles weaving their way through. Vehicles honked non-stop. In fact, most of them had bumper stickers that read “please sound horn.”

This was their first glimpse into their new lives in India.

The family lived there with student visas. While the children attended public school, Aggie’s husband, Manouchehr (Mac) Missaghian, worked on obtaining a Bachelor of Commerce degree.

“I spent most of my time serving and taking care of the other Baha’i teachers in our home,” says Aggie. A Baha’i teacher herself, Aggie went on trips to other cities and provinces in India to teach the Baha’i Faith. She attended many conferences in several different provinces. In addition to being busy with the Baha’i community or teaching, Aggie had her hands full raising three rambunctious boys.

Back in Iran, the Missaghians owned a piece of land which they rented. This served as their main income. In India they could afford a maid and other luxuries of a wealthy Indian family.

Three years after their move, a summer vacation back home in Iran was approaching. However, by 1978 the Islamic revolution was beginning and environments were hostile. Their three-month vacation was cut short and they quickly returned to the safety of India. As Baha’is, Aggie and her family were no longer welcome in their home country. By January 1979, the Islamic Republic of Iran was in control.

Stateless and Searching for Salvation

With their land seized by the government and their assets frozen, Aggie and her family were refugees in an overpopulated country that wasn’t accepting immigrants. When their visas expired, where would they go?

They were not alone in their struggles. Many Baha’i Iranian families were displaced and seeking refuge. That’s when the international governing body of the Baha’i Faith, the Universal House of Justice, which guides the growth and development of the global Baha’i community, stepped in.

The Universal House of Justice reached out to the United Nations High Commissioner for Refugees (UNHCR). As a result, Aggie and her family were among the many families declared stateless in 1981. This meant that they were “not considered citizens or nationals under the operation of the laws of any country,” as defined by the UNHCR.

Aggie and her family were provided refuge in India, on the condition that they actively sought emigration. In late 1982 the family applied for landed immigration in Canada. The process took many months, but by January 1984, they finally had somewhere to go. With a loan from the federal government of Canada, Aggie and her family flew to Prince Edward Island.

The Baha’i community in Prince Edward Island was in contact with them and had arranged temporary sleeping places as the government searched for an apartment they could rent.

The harshness of winter in Canada was not the only stark difference. Aggie’s oldest son, Nadim, became the breadwinner. At nineteen, Nadim was the first to find a job in their new country. He worked as a busboy, handing his paychecks to his father every two weeks. Once a fairly wealthy family, now reduced to a single minimum wage income, son supporting parents. I can only imagine how my grandparents must have felt.

Aggie found work as a cleaner at Burger King. Washing floors, toilets, and tables, being told what to do by a twenty-something year old kid boss. If her friends back home could see her now… But Aggie didn’t let pride stop her from working as hard as she could, earning respect and persevering.

Aggie moved on to other jobs, including mending frames in an eyeglasses factory, and a cook at the PEI Culinary Institute.

While attending classes for English as a second language, among other immigrants and refugees learning the language, Aggie’s teacher recommended her to the PEI Association for Newcomers to Canada.

Aggie began working for the Association as a settlement coordinator. She could personally relate to many of the families she assisted which gave her a level of insight. She would meet and greet clients at the airport upon their arrival, assisted them in finding temporary accommodations, permanent housing and purchasing household staples. She would also help them complete paperwork to obtain Social Insurance Cards, Child Tax Benefits, Permanent Resident Cards, and PEI Health Cards.

“Most of the refugees have survived tragedies in their home countries and arrive in Canada feeling emotionally drained and vulnerable,” says Aggie. “I feel a great deal of compassion and respect for our refugee clients.”

She worked continually with mental health care providers and others to explore ways to enhance mental health supports for newcomers in need.

“I am so happy and proud to be part of such a talented and hardworking settlement team.”

Aggie retired in June 2011 after 24 years with the PEI Association for Newcomers to Canada. Aggie is missed dearly by her co-workers and by the many clients she helped over the years. She affected so many lives throughout her career, and her retirement party was a large community celebration attended by coworkers, family, friends, and clients.

“Now that I’m retired, my wish is to travel and see my children and grandchildren,” says Aggie. “I’m also trying to do more activities with our faith community in PEI.”

My grandmother’s faith — in her religion, family, and herself — never faltered. She faced many hardships in her life but always stayed strong and she was able to take those personal experiences and help others who faced similar struggles.

Author: Yasmin Missaghian, was born and raised in Ottawa, Ontario. She currently lives in Kelowna, BC and is a second-year writing and publishing student at Okanagan College. She is a poet and a writer of short stories.