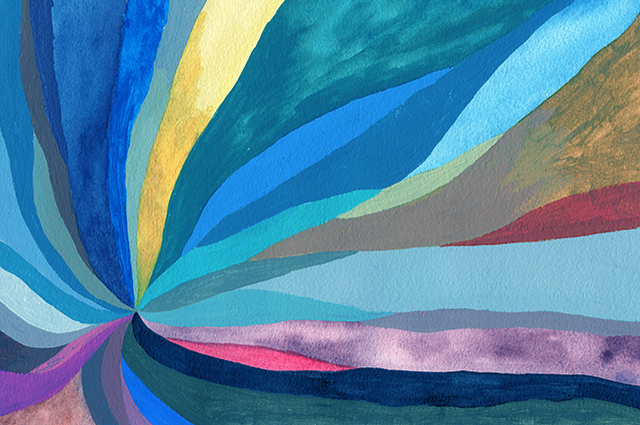 I watched a Vincent van Gogh movie last night – the one with Willem Dafoe – and I couldn’t sleep for the colours and then I started thinking about something his landlady said about short stories.

Sometimes I yell at the television but last night I whispered, sad and happy are almost the same. What I meant was they have the same ingredients although differently proportioned.

This is not A Trip to Bountiful.

Some nights I wake up at three in the morning and all I see is the colour of the old house. Grumbacher might call it Cauldron Fog.

Every morning I think – no, I know – I should go back. I am still considering it as I sit on the balcony with my cigarette and coffee, the windows around me glowing with amplified sunrise.

And then, just like in a movie, I get the phone call. It’s a terrible connection, growly and electric, but my father’s sister – at least I think it’s her – breaks it to me – at least I think she does – and before you know it I am steering my car from the underground onto dark streets which become less punctuated with lights as I get further out of town. There are a few cars at first but pretty soon it’s just me and I smoke and stare straight ahead.

My doctor recommended meditation a while ago but I couldn’t do it. I couldn’t stop thinking. But now there’s not a thought in my head. There is only the cool white idea that this lack of thinking is what’s keeping me from turning around.

A couple of hours and things start falling into place. Hawkins Bridge, Clairpointe Lighthouse, The Early-To-Rise Motel, and then a few glimpses of cobalt through the trees, little fishing boats like they’re painted on, and I start thinking again.

I recently heard that astronauts feel as if they’re falling all the time. This is how I feel when I pull up to the house, as if all the motion it took to get here sort of unravels inside me and down I go go go.

My brother Pauly used to get that feeling when he was in bed. He’d ask me to hold his hand sometimes so he could fall asleep without falling away, and we’d hold hands in mid-air, in the space between our beds.

But there was something he liked about that feeling too, I guess, because only a few years later when I visited him in hospital after an overdose – and he almost didn’t make it that time – I asked him what it felt like getting high like he did from needles and he said, like when I was a kid falling asleep. I said, aren’t you afraid you won’t come back? and he waited a little before he said, no, not any more.

My father kicked him out of the house.

He’ll come back sure as shit, he said, don’t you dare let him in. But I did. I let him in and he had a bath while I sat on the side of the tub and held his hand like he asked. Everything was slow and sad sort of like the van Gogh movie which I remember now is called At Eternity’s Gate. But then he left with five hundred dollars from my father’s sock drawer and after that, my father kicked me out, too.

I heard that 97% of heroin users die from it but I didn’t know about Pauly. I supposed my aunt would call if something happened but sometimes you just never find out. You never know. You are just different shades about it all the time, and not permanent anything.

I get out of the car and slip into the cauldron fog.

The curtains are drawn and the living room dark but I hear undertaker voices from the kitchen and when I walk in, the place is like the sunflower painting. Through the windows are those phthalo blues and dioxazine purples in swirls and crazy bits of napthol scarlet and then I look around the corner, past the fridge, and they’re laughing. Pauly and my dad. They’re sitting there laughing.

I think for one cerulean moment that I might be in heaven but Pauly turns and something in his face goes on and my dad says, hey kiddo, and kicks the third chair out for me.

As I sit down I see big dabs of pain all over them and I notice for the first time a swirl of it on my own skin.

Right away, they both reach for a hand to keep me from falling away again.

Author: Sherry Cassells writes the kind of stories she longs for and can rarely find, each meant to steal one’s heart from the last like floats in a parade. The Story Parade 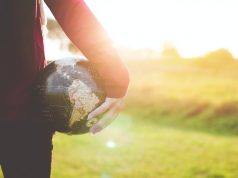