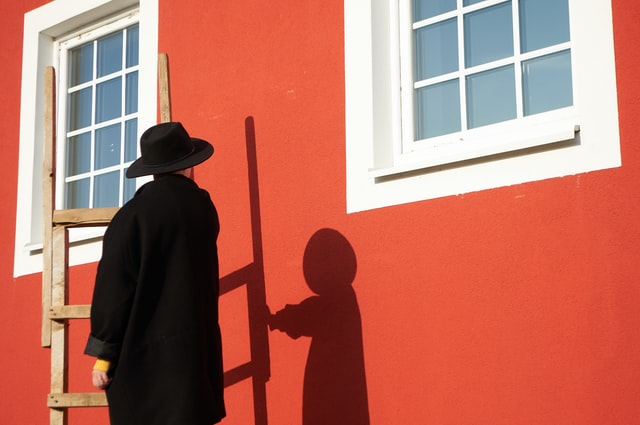 If you think for a moment, there is a connection between meditation and comedy. First of all, they both require practice and a light touch. But it goes deeper than that.

For the last six months I’ve been taking online meditation classes with Yogendra Mishra, who lives in Rishikesh, India in the foothills of the Himalaya mountains. He practices various styles and has been teaching for 35 years. Yogiji is not one of those celebrity yogis but he’s very wise. He has a light touch. In fact, he can be very funny. Doesn’t take himself too seriously.

For the first few months it was a hard slog. I moved around the house, starting upstairs in the cold of winter, moving to the living room in spring, looking out the window and seeing the beautiful red fox, the jays and pheasants, then moving to the lower level where I start at the computer, then shift to the meditation cushion and dim the lights.

Lately we’ve been going through the three forms of Buddhist Vipassana (witnessing breath, then body, then mind). My practice has been deepening. I’m realizing every experience is not so much about what happens to you but rather about your state of mind at the time. This is something we all know in theory but now I’m feeling it at a deeper level. Slowly, slowly, as the yogis say.

Meanwhile, when I need a break I’ve been watching comedians goofing around on YouTube. Seinfeld is driving his friends around for coffee. He is laughing so hard he can hardly drive. Yes, these pros practice a new joke for months, but they can also improvise. Larry David complains that during the Seinfeld show he had to work four, five, sometimes six days a week. It was brutal. Mind you, they both made hundreds of millions of dollars from that show.

Canadian Martin Short has this obnoxious character Jiminy Glick who interviews a lot of Hollywood stars, mostly comedians. He rips into them with ridiculous questions, gets their names wrong and doesn’t know their bios. He also eats a lot of donuts.

Some of the clips are the stars being interviewed on legit late night shows like Jimmy Kimmel and Jimmy Fallon. These guys all know each other, but there is still the patina of the cool kids interviewing the cool kids.

Then I see Eddie Murphy on a talk show or two. He is chill, not playing to the host or to the crowd. He answers a lot of questions straight up when he could be stabbing the laugh button. Here’s the difference. He is comfortable in his own skin.

The host asks him what about when he is working on a new routine but maybe every joke won’t get the applause. Does he worry about that? No, says Murphy. He doesn’t. Watching the show, I realize he is living in his own calm world. If everyone doesn’t like every joke, that’s ok, he shrugs. They are not obligated to. Everyone isn’t going to like you, he says calmly. He laughs at the interviewer’s jokes – some of them.

He has that sense of calm. Zen, some call it. Whatever happens, he will be ok. Yogiji has that same vibe. It’s a certain humility, not forced. Murphy can light up the audience, dial it up in a second. Sometimes he does. But he doesn’t have that manic energy of many who live in front of the camera. He doesn’t have to be on all the time.

He has that simple humanity, like yogiji. Big kids who know their power but also know their place. So much of adult life is about creating a persona and presenting it to the world. It takes a lot of energy. These guys don’t need to. They can just be themselves.

We need more of this in the world today. We polarize quickly. There’s a lot of anger, based on fear, people seeking approval in an uncertain world. Eddie Murphy is very successful but he doesn’t let that define him. Same with Yogji.

Sometimes the joke is on them. They are fine with that.