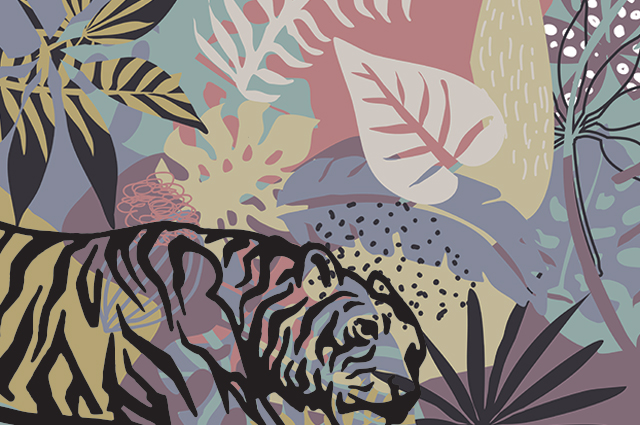 When I wake up at three in the morning it’s all I can do to not phone Harry.

Hello, he’d say as if he were trying to fog up the screen. I wouldn’t say, it’s me or guess who right away like before. I’d say, it’s Sherry – a glitch between the Rs then silence like I’d put the phone in my mouth – then I’d say, it’s me as if I’d swallowed it.

At three in the morning I think he would prefer to go back to sleep.

Harry used to tell me his dreams and I know listening to people’s dreams can be like listening to a tap drip but not Harry’s. He’d go slow and start with something you’d latch onto almost involuntarily and he’d place a picture in your head like a paint-by-number, all white and portioned out. Then he’d say something like a tiger was in my dream, and before you knew it your picture got seeps of hot orange and when he said it stared at me, a pool would fill with dark liquid and then another would leap to its side.

You ran with him, never certain whether you were pursued or pursuing – but you didn’t ask – you knew Harry said what he said purposefully, and left what he left with equal vigilance.

The dream would end – he would stop talking – and everything he’d said and given you colours for would crash into place and that dream would be on the edge of you all day like a sharp little planet revolving around you and it wasn’t even your dream but it also sort of was, after all that, in the same way a paint-by-number isn’t really your painting but sort of is, too.

Harry’s dreams were strange and beautiful, terrifying but funny, deep and trite at once.

Sometimes, sleep thick in his throat, he would toss a harrowing situation from his pillow to mine and I would find myself upon an ocean of hollow blue triangles for instance, leaping to safety – and safety, Harry said – is optional in dreams. You can go ahead fuck it up see what happens, he said, but I don’t think he ever did. Harry was not a fuck it up person. He always knew where the other sock was, replaced the paper towels immediately, portioned his love just so.

But Harry was too conscientious for me. Too precise. Too for-every-action-there-is-an equal-and-opposite. Too fucking logical when he was awake.

We traveled in a red car all the way to Newfoundland.

I remember immense rock and smashed water crowded into sharp little scenes of intense beauty like I was looking through a kaleidoscope. I also remember the urge to get drunk with the red-faced old men who would half-seethe half-sing across sticky tables, their eyes resting on invisible things like cats do, like my father did, until his eyes went from watery to acute, demanding I prove my lineage which I did with a guzzle of whiskey and acute blue eyes of my own.

I resisted this urge for the sake of a smooth holiday with Harry but I more than made up for it our last two years together.

Me? I am a multi-faulted ruin. Never know where anything is, can’t find my shoes or all those lemons until I find them later so disfigured I think it’s the onions, also missing, the gas bill isn’t paid until I pull the fluorescent note out of the mailbox and even then I pay half and make impatient arrangements over the telephone for the rest (as if). Nothing matches, no reserves.

And I don’t dream properly either. There is no gusto. My dreams are like going for an uneventful walk.

But I have the words.

I can tell you where the wind is pointing, the last few maple leaves, one of which is made of lace, another splattered with blood, the third a certain shade of green. I can make you long for the sea – the fog suddenly attached to your memory like an organ. I can fill your head with clouds that have an edge of light but are dark in their centre should you crack them like an egg.

I can break your heart if you’ll let me.