Unless you are talking about things I can plant in my stories like the wooden bridge that went sideways during winter storms or the sound of night hockey or the sharp rocks you placed in the corners of your tent so you wouldn’t fly away, I am not listening.

I am making people up instead.

I use my father’s blue eyes to feel a flash of him and for my mother it’s flowers, just a hint, and then somebody like Theo lands on the page and we’re off.

He blew in over night. I saw the lights whir around my bedroom, just a second of a blueredbluered and then only whitefor a long time which was perfect because I had maybe four pages to go and my flashlight was barely a ghost.

I heard car doors and voices, there was a final whir of colour, and if I thought about anything besides The Mystery of the Old Clock, it was that maybe Syd had finally come home from the hospital. It didn’t occur to me that it could be a kid because they hadn’t fostered anybody, besides me of course, since Syd’s heart attack.

But in the morning there was Theo sitting on the front porch and when I came out we just stared at each other until Hazel came out and said your mother’s on the phone and in he went like there was suddenly a magnet. That’s when Hazel said he’s had a rough time of it this one so you be nice as if I wasn’t nice to all of them.

Theo had curly hair and too short corduroy pants when it was so hot outside and nails gnawed to rinds and the bluest eyes you’ve ever seen when he came back onto the porch, from crying I think, and then Hazel sort of winded her way into the soil of the garden, giving us some space.

This story is when phones were attached to houses and Theo said I need to stay by the phone when I said he could come with me to the park if he wanted, and by the park, I meant the wet ledges above the forbidden rapids. Hazel gave me a look so I sat beside him instead and said to myself maybe tomorrow about the rapids.

Everybody on our street was old. Hazel said pretty soon there’d be young families moving in, kids all over the place, that was how neighbourhoods worked – but I was lonely and I hoped Theo would stick around until Hallowe’en at least – which worked the opposite way on our street. Scary old people came to my door and handed me regular-sized chocolate bars and big bags of Lays and entire bouquets of Tootsie Pops, homemade old-people-cookies that Hazel ended up taking for the nurses when she visited Syd.

Sometimes the neighbours said boo! and wow! at my costume, and asked me to spin around.

Took two weeks for Theo to budge from the porch, but by August we were riding our bikes to the rapids and lying that we’d run through sprinklers on lawns here and there because of our wet clothes and even that met with soft disapproval.

He stayed for Hallowe’en, Christmas, and we shared a paper route more precarious than the rapids, both our bodies required to weigh down the bridge we staggered across to Clear Island where the nuns lived until Sister Theodore saw us in the pink of a blizzard one morning and intervened, allowing us to hand her the paper at school instead, so we only had to cross the darkening bridge for Thursday collections, a hockey game echoing down the lake.

We saved our money and bought a mail-order pup-tent into which we shoved a layer of rocks so we wouldn’t blow off the ledge when we camped at the rapids the following summer, while Hazel and Syd, who was better by then, believed we set up camp in the manicured frills of the park where they thought we spent most of our time.

The rapids were loud and we had to holler to be heard and it was beyond exciting like Niagara Falls built for two.

I don’t think my mom’s going to call, Theo hollered one day.

I heard him but I made him say it again and then one more time in case it got easier because that’s how I’d done it – when I knew my parents weren’t ever coming back – I just kept saying it. And every morning instead of saying today’s the day they’re going to come get meF I said maybe tomorrow but not today.

Because you can’t just throw hope away or holler it out, it has to become part of you, like an organ. 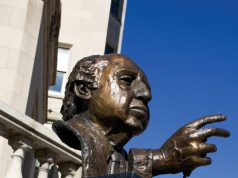